When the Ghost plant was originally built in 1929, its 28 megawatts more than doubled the amount of power TransAlta was able to generate at the time — a far cry from our more than 8,000 megawatts we generate today.

The Ghost plant is one of four TransAlta hydro plants located on the Bow Mainstream System, which is part of the Bow River Electric System. The Ghost plant created the Ghost Reservoir, which stores water for use in generating electricity.

The Ghost plant generates an average of 173,000 megawatt hours each year.

The Ghost plant was named after a native legend about a wild, white horse that ran through the region’s foothills but could never be caught.

TransAlta’s hydroelectric plants primarily provide electricity during periods of peak electrical demand and ensure system stability. Their operating flexibility means they can start quickly to introduce hydro power within minutes, balancing out shortages due to unexpected outages, or providing power at times of high demand.

Protection of the environment is an important part of our hydro power business, as is responsible water use. We continually work with environmental and community groups to ensure habitats are protected, and that all users’ needs are heard.

We are also working to enhance the environmental component of our Environment, Health & Safety Management System to meet ISO 14001 standards (ISO 14001 is an international standard setting the framework for a holistic and strategic approach to environmental policy, plans and actions). 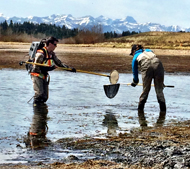